From time to time I come in contact with an author who is really upset about their ebook being pirated.

Usually it happens when a concerned reader was googling for the author and their book and found a bunch of links on various pirate websites where the books could be downloaded for free.

What quickly follows is outrage over the book being stolen and given out for free and then angry emails to various websites trying to get the books pulled down. Sometimes it works, sometimes it doesn’t.

In this article, my goal is to help you change your view of piracy and learn how to leverage it to grow your author platform and sell more books.

The fear of your book being pirated to the point of you losing money has two major flaws: 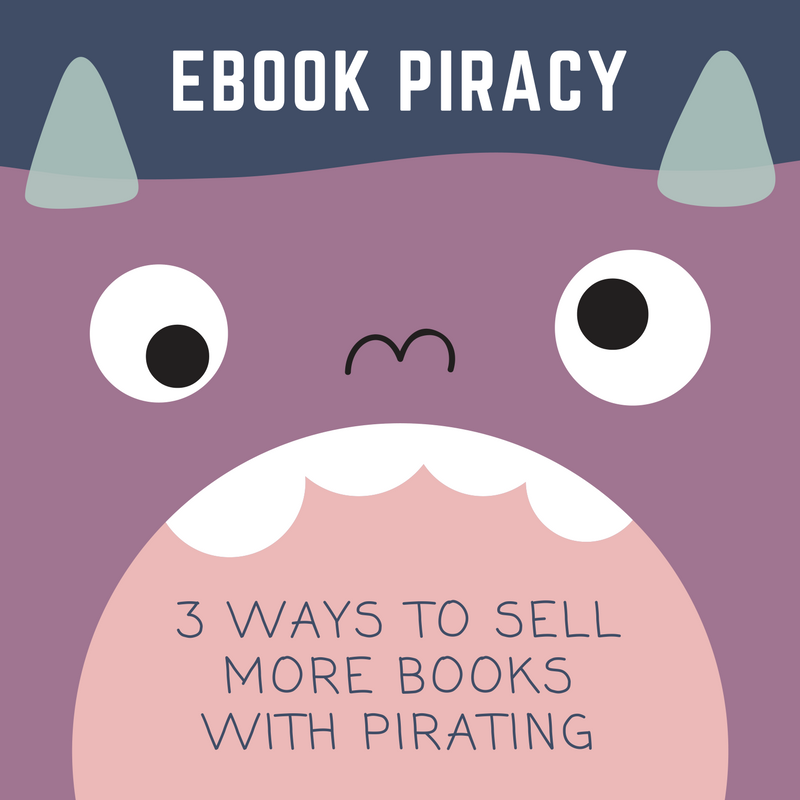 1. What is the real problem?

Tim O’Reilly is the founder of O’Reilly Media which is, among other things, one of the top publishers of technology based books. I still have dozens of O’Reilly books from when I was learning programming.

Here’s what Tim O’Reilly had to say about ebook piracy:

“The problem with writers isn’t piracy, it’s obscurity. It may be hard to monetize fame, but it is impossible to monetize obscurity.”

By far, a writer’s #1 problem is not people stealing their books. It’s people never knowing they exist in the first place.

In my book Your First 1000 Copies , when talking about sharing content, I say:

Is it possible to share too much great content? I know many authors that have wrestled with this question. You may be wrestling with it too. It’s definitely a common question, one driven by the fear that somehow you will give away so much content that nobody will be motivated to buy your books. As a partner to many authors and now an author myself, I completely understand this fear and why you have it.

Although this fear is legitimate, it is small and pales in comparison to the more important concern: releasing a book that nobody knows exists. […] Obscurity is the enemy that you should be worried about above all others.

Here’s one of my favorite quotes from that clip:

If you change your view of ebook piracy to look at it as someone lending your book to other people, all of a sudden it takes on an entirely new form. As authors we want people to share our books with their friends. The more they do this, the more people hear about us.

Even if you can’t go there with me and still hate the idea that people are pirating copies of your book, it’s hard to argue with the results.

Here’s another quote from the Neil Gaiman video above:

“Then I started to notice that two things that seemed much more significant. One of which was that places where I was being pirated — particularly Russia (where people were translating my stuff into Russian and spreading it out into the world) I was selling more and more books. People were discovering me through being pirated. And then they were going out and buying the real books, and when a new book would come out in Russia it would sell more and more copies.”

When the book Go the Fuck to Sleep came out, a PDF of the book ended up getting spread and posted all over the internet for free . At first, the author and the publisher tried to stop people from posting the ebook online. But then things started to change.

“Mansbach [the author of Go the Fuck to Sleep] says he asked one Facebook user to remove the PDF from their page, and the response was, ‘Ok, If you want, but 300 people asked me where I could get the book.’

There was a ‘gradual dawning that it wasn’t hurting us,’ he says. After about a week, Mansbach and his publisher, Akashic Books, ceased trying to stanch the spread of the book.”

The viral (and pirated) spread of the ebook is what rocketed the book to the top of the bestseller lists.

As an author, my biggest hurdle is not stopping piracy… It’s getting people to read my book in the first place!

If people are willing to go through the trouble of pirating my book, the long term effect will be more sales.

So if we can agree that ebook piracy is both not our main problem (obscurity is) and not even a problem at all (it actually helps us), then how can we leverage this phenomena to get the most out of it?

How to use ebook piracy to sell more books.

There are three main ways you can leverage piracy to sell more books.

1. Add Back List Promotions
At the beginning and end of your ebooks, you should advertise your entire backlist. Have the covers and links to where you can buy them online. Make it really easy for people to access and buy your backlist.

2. Build Your Email List
Link directly to your website so people can signup for your email list. This is your #1 tool for building your author platform and selling more books. To learn more about email marketing, I have two great articles for you:

3. Control the Flow
If you’re self published, consider uploading your own versions of your book to the popular pirating website 1. You can see an updated list here of the most popular piracy websites on the net. If you control which files are uploaded, then you’ll get to include your promotions and website links in the file.

Is There Ever a Time to Fight Ebook Piracy?

In general, no. Fighting piracy is a game you will never win and, as we’ve mentioned above, you’re fighting something that will actually help you.

There is, however, one situation I would recommend fighting single instances of piracy.

My author friend found himself in a situation where the #3 result on Google for the title of his book was a foreign site where you could download the PDF of the book for free.

This is definitely not what he wants people finding when they search for his book so he used a DMCA takedown service (like Takedown Czar) to have his book removed from that particular site.

The only time it makes sense to fight piracy sites is when your book is already successful, and piracy sites are ranking higher for your primary keywords than your own website.

Changing Your Perspective About Ebook Piracy

For a lot of authors, it is going to be really hard to change your mindset. The idea that you pour your sweat, blood, and tears into your book and then people rip it off and post it online for free can only be wrong.

But I encourage you to put your emotions aside and be as pragmatic as possible.

Your goal as a writer is to get people to read your book. If they get your book for free (similar to someone lending or giving your book away as people has always done with books) then that’s a win for you. Plus, as you’ve seen with Neil Gaiman and Adam Mansbach, ebook piracy actually increases your sales.

So embrace the idea of ebook piracy and include it into your book marketing plan and you’ll see it help your long term goal of being widely read and selling more books.

1. I’m not a lawyer or pretend to be one. If you are in a traditional book publishing contract, this is probably against the terms of your contract and you shouldn’t do it. Make sure you have the rights before you do something like this.↩
Tim Grahl