The 4 S’s to Sustained Creativity

Tim says: Ginger Moran is a coach, mentor, and writer. She’s also a university fiction and memoir professor and has published her own novel, The Algebra of Snow.

I recently had lunch with Ginger and she told me about her 4 S’s for sustaining creativity. I immediately asked her to share her wisdom with us and she was nice enough to agree.

Has your creativity started playing hide & seek? Do you remember the time when you dreamed and schemed, when your imagination took you places you’d never been, but it has been MIA lately? Is there a book you’ve been dreaming or one that you’ve been writing—but you’ve gotten stuck? I’m here to distill 35 years of writing and teaching and my own strategies for whispering my writing back to help you sustain your creativity.

Some of the many places you might be stuck include:

First of all, I want to say, about getting stuck: THIS IS SO NORMAL!

The creative urge almost simultaneously explodes with doubts and uncertainties. This is by far the rule for writers and not the exception.

So, welcome to the club!

But more importantly, I’ve not only written—I’ve also failed with writing.

I wrote and published a lot of short stories, essays, and articles, plus got my Ph.D., got married, had 2 little kids, galloped around the track, had an agent and had my book nominated for a Pushcart Editor’s Choice Award—and I wrote the whole time. I got up early in the morning and snuck past my children’s doors so they wouldn’t activate the mom radar and come at me for breakfast and I hired kidsitters on Sunday mornings even when I was a single mom working full-time. And then I lost heart. I was working full time as administrative faculty and my ex sued me for custody of kids he’d had nothing to do with—and I just . . . stopped writing.

It took me some time and some learning and leaping off some cliffs, but now I am back at it—with 3 novels, an essay collection, a nonfiction book all done and dusted—and my fourth novel almost through the first draft. I’ve published one of the novels through a small press and it will be released as an ebook in October.

Where did that stick-to-it-ivness come from?

I know that I am a writer in my heart, have known that this is the way I approach the world, through story, and that the curiosity I always feel toward people, places, plot—life itself—is the hallmark of a writer.

Where did the confidence to do so come from?

I have felt—and still feel—those same fears and doubts on a regular basis, but they exist at a very low level at this point, and are almost like a comforting, predictable, low hum—a kind of white noise that I expect as part of the process. And I am regularly publishing essays in national magazines, I am writing my sixth book, and routinely see my clients and students into agent or publishing contracts and have the terrific joy of seeing their books appear on the Amazon shelf. I was talking just last week with a client who is waiting for the editorial comments from his international agent.

So I am going to take a step back and talk a little bit of theory and then a lot of practice. My information is distilled from my many years of study with some of America’s top writers of fiction and creative nonfiction—Donald Barthelme, Ann Beattie, Rosellen Brown, Phillip Lopate, and John Casey among them.

So I’m going to start a little bit big and theoretical here—it’s the professor in me coming out—so bear with me just a moment.

What is creativity? Where does it come from?

Freud saw it as fundamental to life—as eros, or the life force—so much so that he not only based his most famous theory on a play—Oedipus Rex—he also saw literature and art as an essential healing forces, the basis for psychoanalysis itself. While the artist and the patient both experience the turbulence of being sensitive and reacting to experience, the madman is defeated by it while the artist is victorious.

Of course, people create for far less lofty reasons—they want to express an experience or a story or to talk about characters they know or have invented. They want to communicate, to teach, to connect. Some people want to make money with their writing. Others are inspired by great writers. Many writers want to make things better or to console. Aristotle said that art has two purposes: to instruct or to entertain. The greatest literature does both.

So why am I talking about all this theoretical jazz? Because I want you to know that you are working within a significant, historical, rich, complex world—and that the reasons both for wanting to create and for struggling with it are deeply human, deeply significant.

Your wanting to write this book is no small matter.

I believe that we write in order to be fully alive.

Doesn’t get much bigger than that.

So what gets in your way? My clients have answered that many different ways, including:

First off, let me say, once again, ALL of these concerns are SO normal. The reason I added two coaching certifications to my education—as a Martha Beck life coach and a Kaizen Muse creativity coach—is that it is so normal for people to get stuck, to fall prey to their fears and doubts—and that is such a loss, to the writer him or herself, and to the world that needs to hear these stories.

What you want—and I want for you and for me—is to achieve the state Brenda Ueland sees as the object of writing when we are wrestling with our project:

“I learned that you should feel when writing, not like Lord Byron on a mountain top, but like a child stringing beads in kindergarten – happy, absorbed and quietly putting one bead on after another. ”

Here are the best techniques I know for achieving this deeply satisfying state: 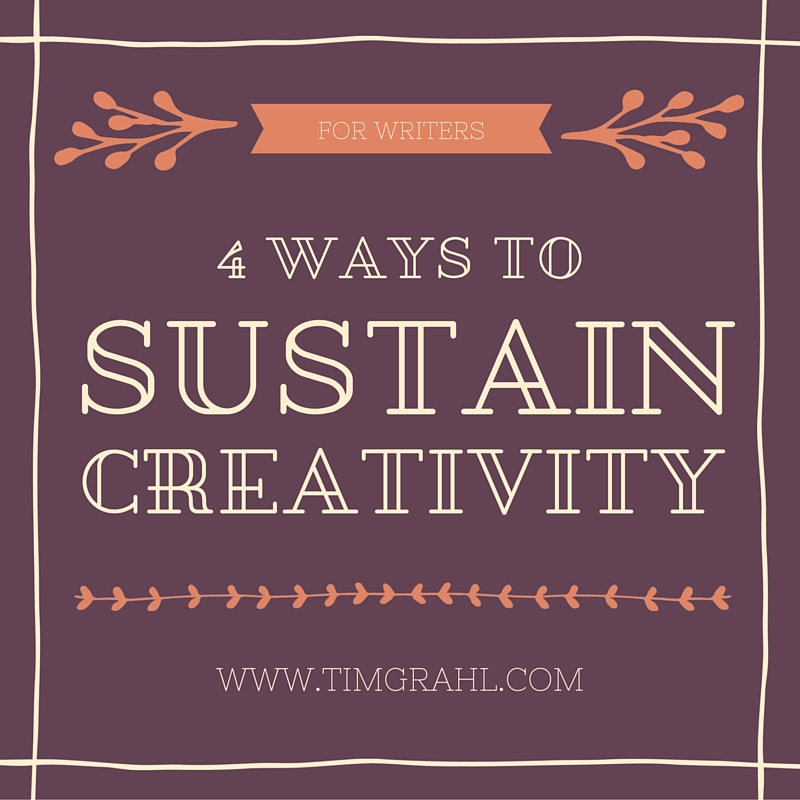 1. Break the task down into Small Steps!

There are almost countless ways to defeat ourselves, but the biggest and worst is to make the task too big and then feel daunted before we ever start. Anything you’ve ever completed and felt satisfied with was a big job—and you got there by following small steps. Children, a degree, a career—if we had said now I will have to take this thing on in one big chunk, well, that would never have happened, right? One tiny step at a time will get you there. My goal is to write 2 pages a day. By the end of the year I have a book.

Like most things in life, there is just a routine to writing. Yes, there is a wonderful vision and it is important to keep that in front of you. Then make a schedule, working backward from the vision, to what you are going to do today to get you there. That takes you back to S 1—what is the small step you can take today to get you to the writing dream?

I worked with a client who was under a very tight deadline for getting her book done—when her father died. She was determined that she was going to finish the book anyway, but she was weeks behind by then. She was going to go to the beach and just work straight through for 5 days—whipping herself on. My question: how are you going to take care of the machine? Huh? When you are writing well, you are a machine—and you must take good care of the machine. She ended up coming up with a rigorous schedule of writing—and an equally rigorous one of walks, snacks, yoga stretches, naps, and strategic, timed phone calls to her support team. She hit her deadline.

I have a prediction: there isn’t a person reading this who isn’t a perfectionist. Yes, I am clairvoyant. Well, no, I’m not! I just know you. And I’m like you. Every one of us wants to write War and Peace. And if we can’t we don’t want to play. Except we do. So how do we deal with the fact that what we write the first, second, third, twentieth time is not War & Peace, not even close? We celebrate. As Anne Lamott said so eloquently—write that sh***ty first draft. Not only because every first draft is crap—they just are, and often the second and third ones aren’t much to look at either—but they are NECESSARILY terrible. If they were good—polished, edited, spiffed up and ready for the agent—then you would have missed the life blood, the vulnerability, the risks, and, yes, the failures, that make a good book good. Go take a look at any book you love—look behind that finished product and ask yourself, did the writer hold back for fear of failing? Mostly, I would say no. He or she went full tilt, hell for leather, giving it his or her all, “daring greatly” as Teddy Roosevelt said via Brene Brown—and then fixed it up later—way, way later. Don’t edit while you are writing. You will wreck it.

That is the audacious, badass way—and that is what writing—engaging, expressing, connecting—is all about.

If you’d like a worksheet for following theses steps, I have one available on my website, available only to readers of this blog.

And if you’d like a list of the resources I’ve used to get past my blocks, get one here.

Keeping your eye on the prize and then watching what is right in front of you, back to the prize, back to the next tiny step—this is how it is done, just like happily stringing beads on a summer day.