The 2 Most Important Book Launch Numbers

Launching a book is one of the more exposing and stressful things a writer can do. Putting out articles and blog posts is pretty easy. There’s not a lot of fear around one of those failing.

But putting out a book is completely different.

It’s this thing that you’ve worked on for a long time. Everybody knows you’ve been working on it. And everybody is going to be asking how it’s doing.

Even if they don’t ask, your Amazon ranking is sitting there for all the world to see.

And it often seems that if it’s not selling in the first week, then you’re screwed. If the sales are still down in a month, then you might as well give up.

I have had so many conversations with authors that give up on their book and move on to the next project because it didn’t immediately start selling.

So today, I want to give you the two most important numbers you need to focus on during your book launch. 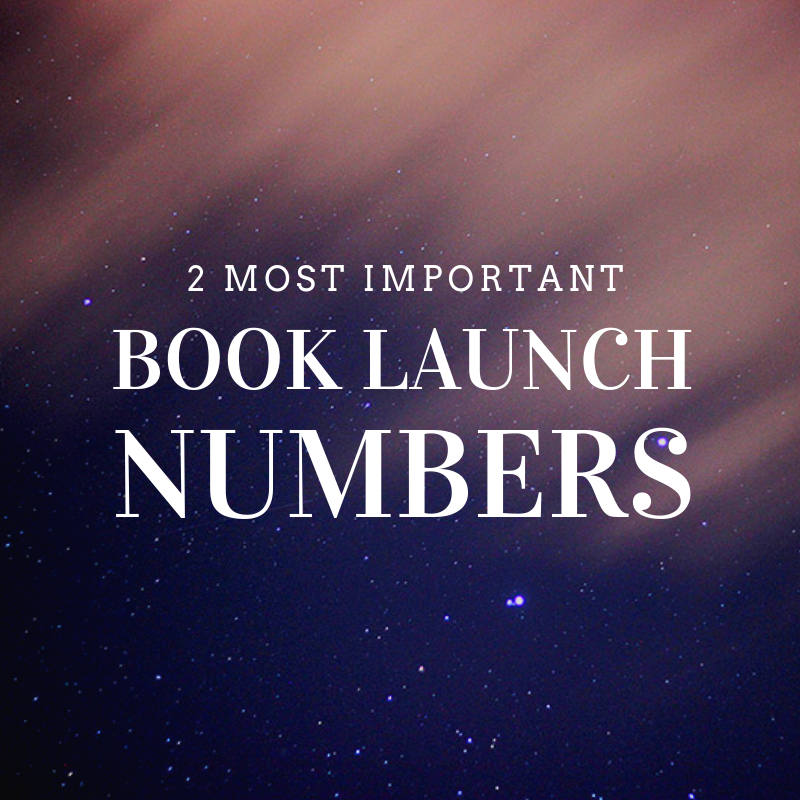 I was at dinner a few months ago with Jay Papasan, author of the mega bestselling book The One Thing. This is a book that has sold well over a million copies.

I mentioned in passing that it usually takes a year for your book marketing efforts to really pay off.

“When The One Thing first came out in April of 2013,” Jay said, “we had a very successful launch. It sold well through the summer as my coauthor and I supported it with around 30 speaking events. But then after the holidays, sales started to slow down. Each week they’d drop a little more. But I stayed committed to the promotion. Month after month I was out doing interviews with anyone who would have me. I found fans on social and would offer to Skype into their office for a Q&A. I did everything I could and the sales kept slipping.”

Jay paused for a beat, then kept going.

“Until right around a year. All of a sudden, after a year of pushing the book, the sales started turned the other direction. They started going up a little each week. That continued for over three years before finally plateauing. And I’m still committed to promoting it every week.”

This is what you see in book promotion.

It usually takes a year of work for you to start seeing the fruits of your labor.

Do not give up on marketing your book for at least a year — 365 days.

That is how long it takes to truly see your efforts pay off. If you stop before then, you’ll never get to see the true potential of your book.

Shawn Coyne, the author of The Story Grid and veteran editor of 25+ years experience in and out of traditional publishing was giving me this advice based editing and publishing hundreds of books.

He had a lot of interesting math to back this up, but the point is this…

If your book is only ever read by 3000 people, that’s not enough to get over the tipping point. Even if it’s an amazing book, that won’t give it enough infecting power to keep spreading.

In Shawn’s mind, his goal as the publisher is to get 10,000 people to read the book and give it a chance. Once that has happened, you get to find out if the book is good enough to stand on its own.

However, if you give up before this point, you never get to find out if the book could have made it.

I like to picture an actual rocket launch when I’m talking about these two numbers.

The amazing thing about books is, once they have enough readers, they continue to sell on their own with little to no marketing for years and years. My book, Your First 1000 Copies still keeps selling well even though I haven’t actively marketed it in almost five years. Many of the books I’ve seen that launch modestly, but were able to sell 10,000 copies over the first 1-2 years, have kept selling more year-on-year with no extra marketing effort.

Books have a lasting power that other media doesn’t have.

Your job is to get your book into orbit!

That place where it just keeps going with no extra effort on your part.

That is where these two book launch numbers come into play.

Your focus shouldn’t be on the first week of sales, or even the first month.

Once you’ve done that, you can hold up your hands, say a prayer to the muse and let fate take your book where it needs to go.

What to do next?

I often teach a training called The 10 Marketing Secrets of Bestselling Authors.

In this training, I teach the principles I’ve learned from working with dozens of New York Times and Wall Street Journal bestsellers over the last decade.

Here’s a couple of the principles:

Most authors make the mistake of approaching influencers by asking for something first. Sometimes this makes sense, but if you can start out by being helpful, it’s always a better place.

Many of the authors I’ve worked with have diligently used their platform to promote other authors. They review their books, let them guest post, have them on their podcast, etc.

When you start by helping influencers first, they are more likely to help you market your books in the future.

The goal isn’t to do a huge blitz of marketing all at once. This isn’t usually effective for authors and is extremely hard to maintain long-term. I’ve seen so many authors get burned out on marketing because they try to do everything at once.

Instead, play the long game.

Start doing two things every week to promote your book. If you do two things a week, that’s a 104 things a year. You’ll see things start to add up and have an impact.

Want to learn the rest?